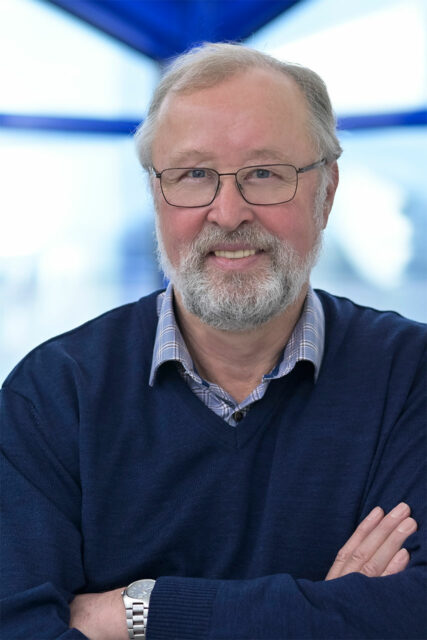 Making things better – that is always the impetus behind developing something new. A new product, a new process and, as often happens in parallel, a new company. That is basically how simple it was with SATEC: In the early 80s, a seed cultivation company wanted to dress oilseed rape with an insecticide powder, something that would have led to unacceptable working conditions for employees. There were no alternatives to this product. However, wherever there’s a problem, there’s usually a solution and that solution was discovered in a home workshop: Mixing the powder with an adhesive and a dye so that it would stick to the seed.

The SATEC® Handelsgesellschaft mbH was founded at the end of 1981, under the management of Jens Hackländer right from the start. And that is how our journey began, with the development and marketing of organic adhesives to produce almost completely dust-free dressed seeds. However, dressing technology at that time was not suitable for processing such potent adhesives. Our partner at the time, Kurt Hintze, modified one of his legendary dressing machines (see image) to meet the new requirements. This is how adhesives and machines found their way into the sector of cereal, oilseed rape and maize dressing.

Dressing media used to be powder-based, but we simply “liquefied” them with our adhesive.

We received permission from the English chemicals group ICI to use the mixing chambers of their ROTOSTAT coating machines to develop our own coating machine. This led to our SATEC CONCEPT® batch coaters, all based on the rotor-stator principle, and all equipped with our software. We have since remained faithful to the ROTOSTAT method: Precise weighing and measurement technology, together with excellent distribution of the coating agent on individual grains. This has led to a complete machine series over the years: Laboratory, technical and production equipment offering a range of automation levels. For the past 10 years, we have been selling probably the smallest batch coater in the world (batches of just a few grams, for instance, 20 barley grains), with precise pump and dosing technology, ideal for working in seed cultivation or testing stations.

Our technology, with its coating, encrusting and pelleting options, has since gained a foothold in various branches, where we no longer know all of its many possible uses. We can, however, say today that we build the most compact and most powerful aggregates. Our complete systems include feeding and discharge of the goods, as well as drying of the coated or pelleted goods.

In parallel with the development of these machines in the 80s, we also started working on our own improved plant protection agents for oilseed rape and maize coatings. We were able to include the active substances thiram (fungicide against damping off diseases) and carbosulfan (insecticide against frit flies, wireworms, cabbage stem flea beetles) in our portfolio, and obtain approvals for the agents TMTD 98% SATEC® and COMBICOAT CBS® in Germany, and at a later date, in France, Belgium, the Netherlands, Denmark and Austria. The two latter agents reached a market share in the oilseed rape and maize sectors of over 50% at one point. Their high effectiveness proved impressive and, combined with our additives, they offered very high quality and dust-free encrusting that was greatly appreciated by growers, traders and farmers. At its peak, our TMTD 98% SATEC® was approved for approx. 80 crops.

A few years later, we were able to market the BASF fungicide DMM, which was an ideal supplement to our product containing thiram.

An abrupt and major change in the sector of plant protection, particularly in the field of seed coating, occurred in 2008 due to bee mortality in the South-West of Germany. That meant a lot had to change for other companies, but not for us at first, because we had already been offering what suddenly became a requirement: A wear-resistant coating containing the active substances, adhering to the seed and thus not forming any dust that could enter the environment.

The only method available then for measuring coating dusts, the Heubach test, did not really impress us in terms of practicability. We therefore started to develop our own, which gave rise to the SATEC® Dust Monitor.

Occupational safety and environmental protection have greatly increased in importance over the past years. There are certainly a range of methods for random sampling post-production to check whether the dust levels of the coated seeds or other types of bulk goods meet specifications. Our SATEC® Dust Monitor means that such testing can be implemented directly during production. Automatic sampling and photometric analysis of the measurement volumes obtained in a counter-current process enable direct intervention in the production process. Data storage for evidence of compliance with specifications is ensured as a matter of course.

Our system can also be used for raw material quality control, both in online and offline operation. Depending on the model, the measurement data are displayed with various particle size fractions. Our basic model for measuring dusts is approved by the Julius-Kühn Institute (Test No. G1913). An upgraded model, with new measurement technology, was developed just in time for our Jubilee: The SATEC Dust Monitor 2.0.

Nevertheless, after the turning point in 2008, and due to the changing social demands on the production of agricultural and horticultural products, it became and still is increasingly difficult to renew existing approvals, nationally and at EU level, or even to get approval for new active substances and agents. This had a strong impact on us: The first thing we lost was the insecticide carbosulfan. Rival active substances used in coating agents for oilseed rape and maize also lost approvals. The consequences for oilseed rape: Flea beetles and cabbage flies have now become major problems and restrict planting in many locations.

Our fungicide TMTD 98% SATEC was widely effective and approved for numerous horticultural crops. Since its approval expired in late 2018, it has become clear that there are now gaps regarding the control of damping off disease in numerous minor crops. This represents a real economic problem for producers of vegetable seedlings and herbs. We have also lost an important repellent in the form of the active substance thiram, which protected seeds from birds and small mammals, and which in turn protected them from harmful coating agents. The discontinuation of Mesurol, and Antraquinon before that, now means that there is no repellent available, and not just in Germany.

So, what do we do? We break new ground! We have always kept our eyes wide open for alternatives to our products. We have been researching the inoculation of seeds with bacteria and fungi since the end of the 90s. Nutrient dressings have also continued to play a role since that time. We have since managed to create a product portfolio based on the wide range of various “panaceas” available worldwide. These products have continued to impress us in multi-year tests and in numerous crops, both in arable farming and vegetable cultivation.

We work together with reliable partners, who supply us and share their expertise with us. In this way, we can offer fertiliser solutions, such as COMBICOAT® fit, and various formulations with bacteria and mycorrhiza in our COMBICOAT® Bac and Myc series. They all serve to better establish young plants, particularly under unfavourable growth conditions/abiotic stress. We also have an adhesive for inoculum material in the form of SATEC Sticker RHI, as well as adhesives and powders for pelleting all kinds of seeds, SATEC Sticker WWL, together with diverse SATEC pelleting masses. 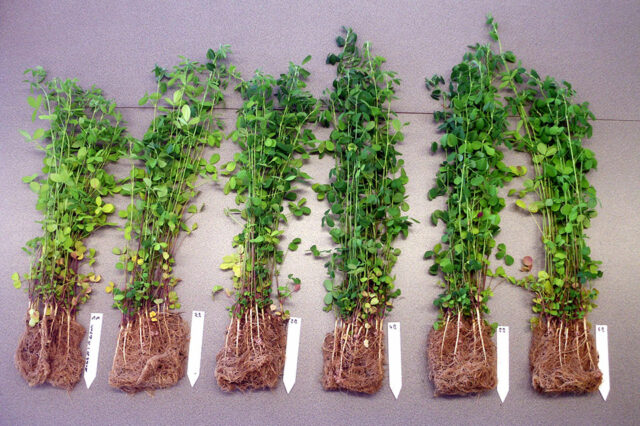 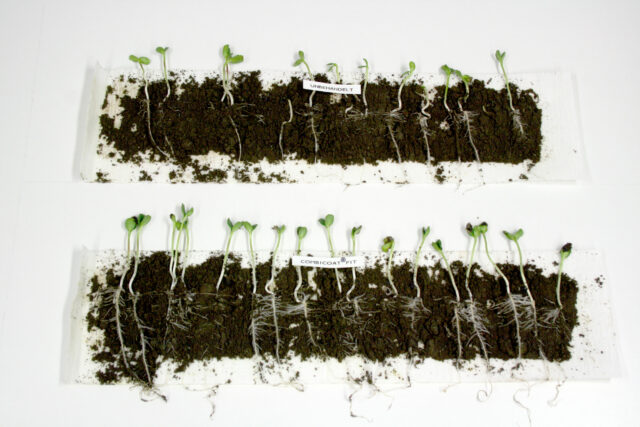 We, and the producer, have however not given up the fight for thiram or for our agent TMTD 98% SATEC. Because we are convinced that the use of a plant protection product as a coating agent is justifiable for numerous crops, taking into account species and environmental protection.

Even though it sometimes feels as if we are tilting at windmills, we will continue to fight for the future of these coatings. We still hope that all participants (industry, authorities, users) will also work on this so that we can, one day, read the following on the website of the BVL (Federal Office of Consumer Protection and Food Safety) again: “Seed coating is the most environmentally-friendly plant protection measure.”

And finally, a few words about the structure of our company.

The SATEC® trading company has moved around over the years: From Billstraße in Hamburg, we moved to Elmshorn on Max-Planck-Straße and then finally, in 1993, to our current address on Robert-Bosch-Straße. A hall was added in 1997 to finally unite the workshop, warehouse and applications technology centre under one roof.

Five years ago, we founded SATEC Equipment GmbH, as a subsidiary of SATEC® Handelsges.mbH, in the same location to outsource the coating machines and technical equipment sectors. 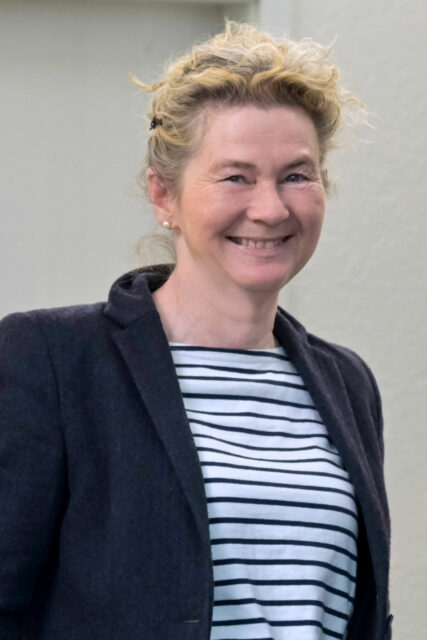 The number of employees has continuously risen over 40 years from the initial four or five people to, at peak times, 21-23 people. Currently, both companies employ 11 full-time and 6 part-time staff. Jens Hackländer is the managing partner. He is supported in the management team by his wife, Susanne Hackländer, authorised officer and responsible for development in the divisions of coating agents, additives and marketing, and Carsten Zieske, authorised officer and technical manager of SATEC Equipment GmbH. The management team itself is in turn supported by Claudia Pallesen, who has been in charge of the secretarial office/administration for 32 years now.

40 years – a long time during which we have more or less successfully made our way in a niche sector. We have seen many company names and products, together with their employees, come and go. We are nevertheless proud to still be present as a relatively small player and to have set various milestones in the sector of seed treatment and coating/pelleting technology. Our strength lies in our manageable company size which means that we can instantly develop new ideas and respond rapidly to customer requests. Our technical and chemical departments – both under one roof – continually inspire each other. And that is also thanks to our highly experienced employees on both sides.

This is why we are optimistic about the future. Seeds will always be a part of life, together with the need for their protection and good sowing capabilities. 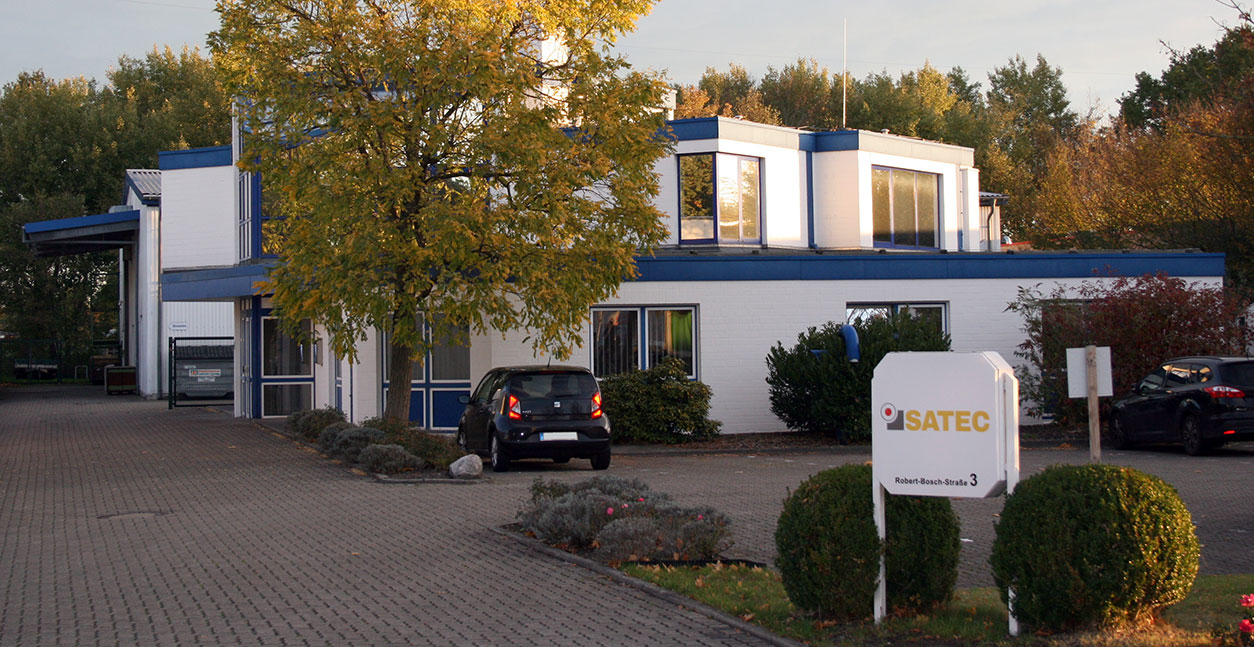