At the heart of the SATEC batch seed treater is the patented mixing drum, consisting of a vertical cylindrical stator (2) and a horizontal, plate-shaped rotor (1). 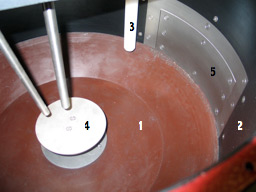 The gentle but thorough mixing of the seed obtained in this way is enhanced by two mixing sticks (3) or mixing blades, which can be easily adjusted from the outside.

In the middle of the mixing chamber is a very rapidly rotating spinning disc (4) which ensures excellent initial distribution of the dressing over the rotating seed stream.

Depending on the type of dressing and seed there now follows a brief mixing phase, at the end of which the discharge door (5) at the side is opened. The centrifugal forces ensure that no seeds are left behind after the mixing chamber has been emptied.